The 2017 Economic Impact Study of the U.S. Horse Industry

The American Horse Council Foundation (AHCF) released a report last Tuesday, which detailed key statistics about the current state and contributions of the equine industry in America. The study divided the activities of the industry into four main sectors: Recreation, Racing, Competition and Working Horses. Employment opportunities and economic growth for equine businesses in America appear to be increasing, suggesting promising prospects for the future of the international horse industry as well! Here are some of the main findings: 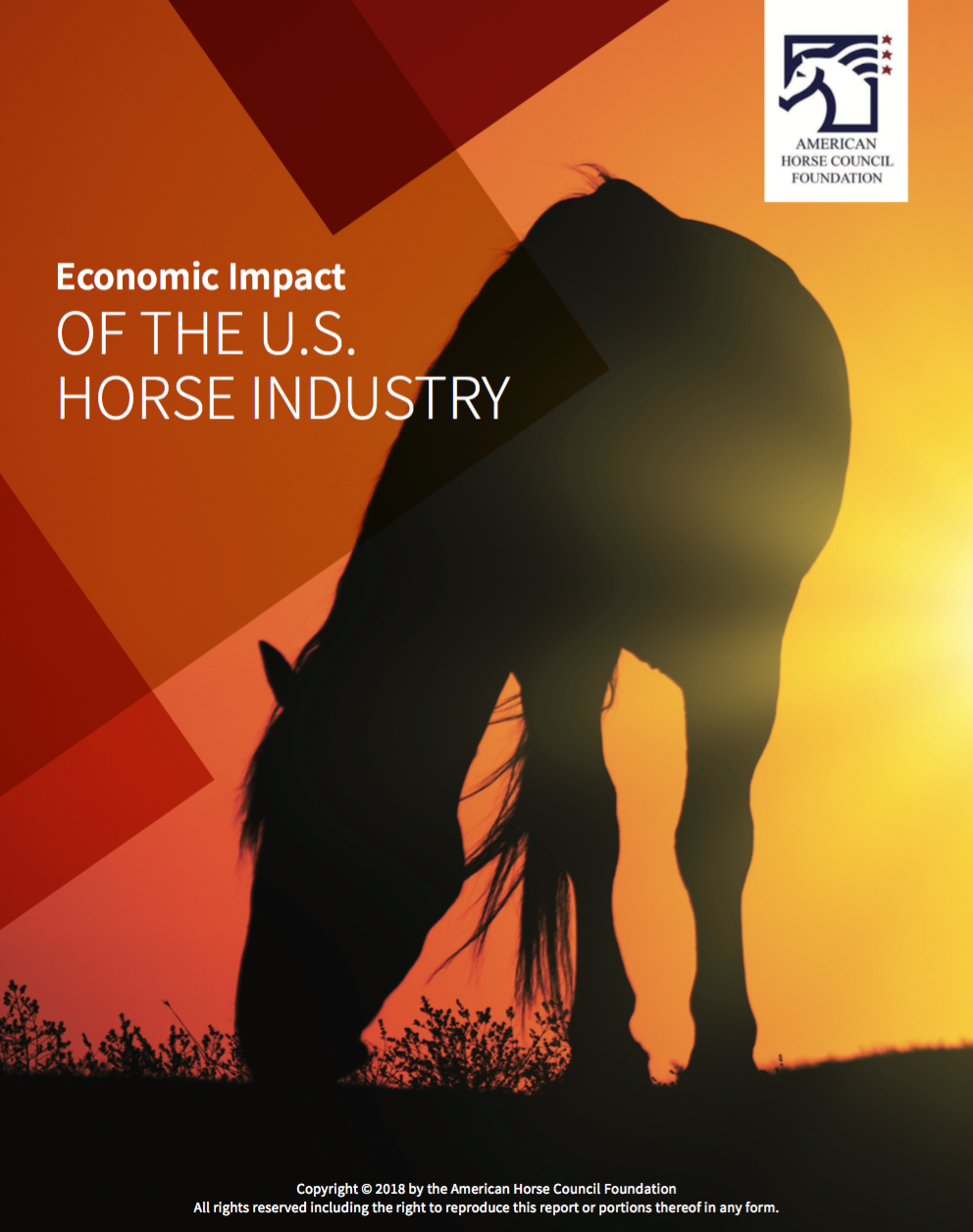 The U.S. horse industry has an economic impact of around $122 billion, which is $20 billion dollars more than the estimation made in the 2005 study. The industry also employs around 1.74 million people, and is responsible for 7.2 million horses, with Texas, Florida and California having the highest horse populations. Furthermore, 38% of those who take part in the industry are under 18.

As you can see from the pie charts, the Racing sector has the largest economic impact, and employs the most people, with the Competition sector not far behind on both accounts. 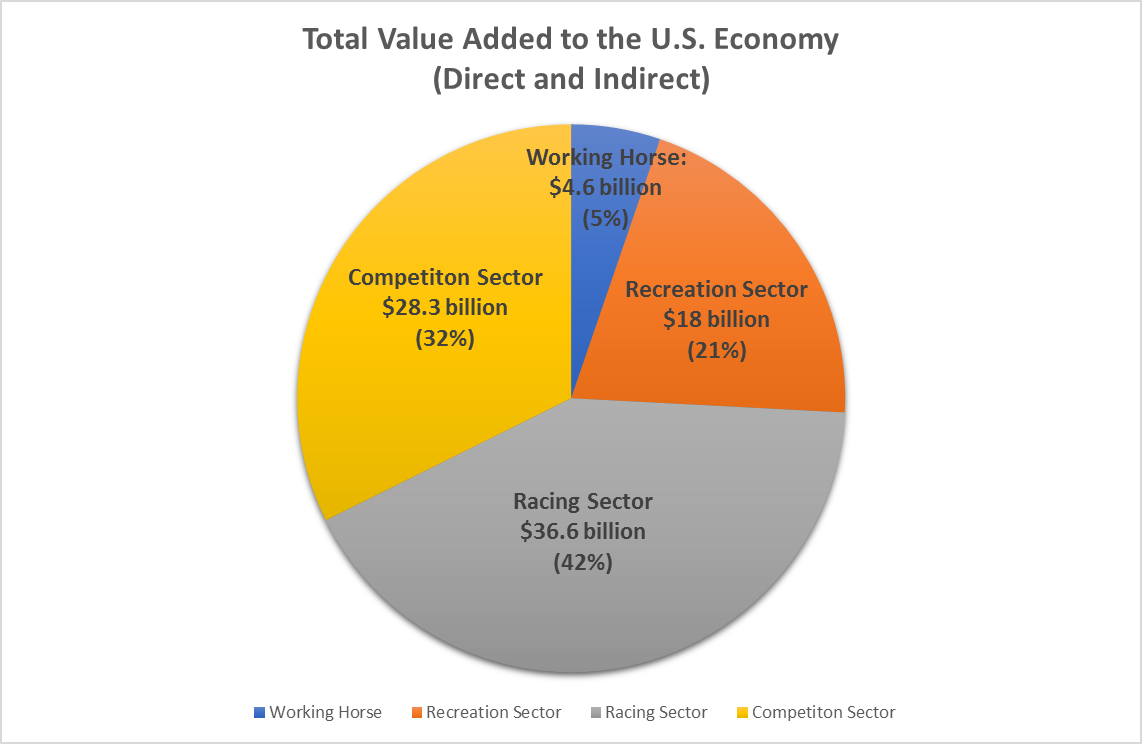 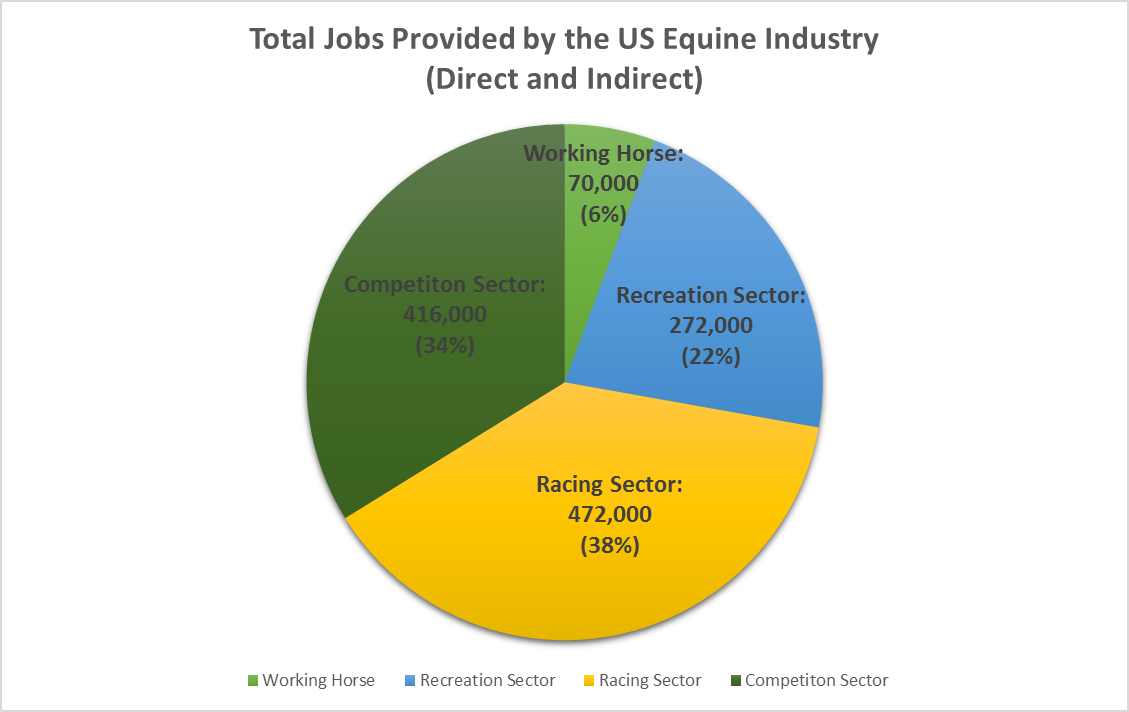 • In the Recreation sector, it was shown that 13 million households participated in trail riding, and 87% of them did so on public land.
• In the Racing sector, around $11 billion was waged in 2016 at Thoroughbred and Quarter Horse racetracks, and $1.45 billion at Harness racetracks.
• In the competition sector, 6,313 competitions were licensed in 2016, employing 1,654 managers to run them.
• 30.5% of American households contain a horse enthusiast.
• 80 million acres of land is dedicated to horse-related activities.

Unlike previous years, this latest report included the contributions made by the Working Horse sector, including horses utilized as part of police units, therapy programmes, carriage operations and lessons. Julie Broadway, the president of the American Horse Council, stated that “traditional working horses remain an important part of the industry, and not just on American ranches. In cities like New York and even here in Washington, DC, it’s not uncommon to have horses patrolling the streets, allowing individuals access to horses that they may not have otherwise had.”

Ms. Broadway also went on to say this about the benefits of the report: “Those involved in the equine industry already know how important it is to the U.S. economy. Having these updated numbers is critical not only to the AHC’s efforts up on Capitol Hill, but also for the industry to demonstrate to the general public how much of a role the equine has in American households.”

For more information, or if you want to buy a copy of the National Economic Impact Study, go to the AHC website at http://www.horsecouncil.org/horsecouncil-publications/.